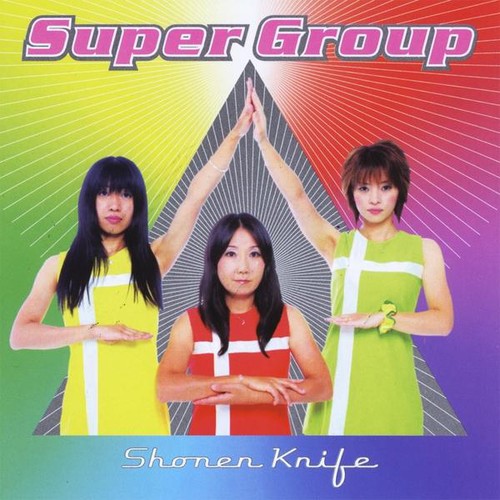 Shonen Knife is the legendary female Japanese pop-punk band formed in Osaka, Japan in 1981. Heavily influenced by 1960s girl groups, pop bands, and early punk rock acts, such as The Beach Boys and The Ramones, the trio plays stripped-down songs with infectious melodies and simplistic, exuberant lyrics sung both in Japanese and English. Despite their pop-oriented nature, the trio maintains a distinctly underground garage rock sound rooted in edgy instrumentation and D.I.Y. aesthetics. The bands twenty-seven-year career has seem them tour the world with Nirvana (on the Nevermind tour), Sonic Youth and as part of Lollapolooza. They recorded sessions for John Peel, appeared on MTV, Beavis and Butthead, the Conan O'Brian show and recordeda track for the popular cartoon "The Powerpuff Girls". The concept of their 14th release "Super Group" is to "go back to the starting point of ROCK". All the lyrics on this album are written in English. There is a cover of the "Wings" song "Jet" on the CD, the Shonen Knife version is very fun and very ROCK. This is the first release from Good Charamel Records. The North American CD release of "Super Group" features exclusive cover artwork and the bonus track, "Evil Birds". This album makes everybody happy.