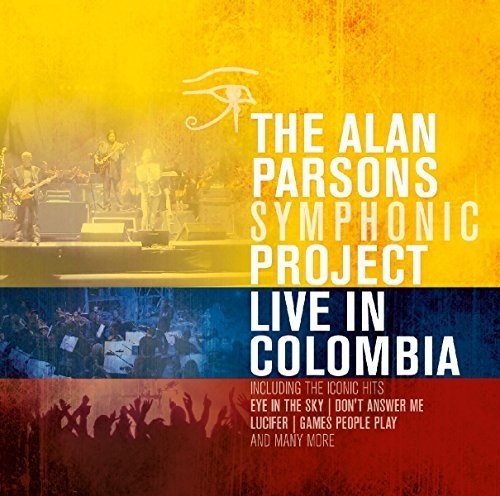 On the evening of August 31st, 2013, a large crowd gathered at Parque Pies Descalzos in Medellín, Colombia. When Alan Parsons appeared on stage, along with the Medellín Philharmonic Orchestra and his band the audience went wild. This is an audio visual document of that incredible evening. THE ALAN PARSONS SYMPHONIC PROJECT "Live in Colombia" is to be released on June 24th, 2016 on earMUSIC as a DVD, Blu-ray, 2-CD digipak, 3 x Vinyl, and download.

Alan Parsons was 19 years old when he landed a job at the world famous Abbey Road Studios, an important first step on his journey to becoming a world class engineer, producer and artist. Following his beginnings with George Martin and The Beatles, his contribution to Pink Floyd's classic 'The Dark Side Of The Moon' earned him worldwide attention. As a producer he had many hits with Pilot, John Miles, Ambrosia and Al Stewart. Together with his manager and creative partner at the time, Eric Woolfson, he developed the Alan Parsons Project. Following their debut album "Tales Of Mystery And Imagination" (1976), they released a series of hit albums; namely "I Robot" (1977), "Pyramid" (1978), "The Turn of a Friendly Card" (1980), "Eye in the Sky" (1982), "Ammonia Avenue" (1984), "Vulture Culture" (1985), "Stereotomy" (1986) and "Gaudi" (1987). Then Parsons and Woolfson called it a day, but Parsons had ambitions to perform the amazing music live. Now to the great delight of his fans, for the first time on a live video and audio recording, THE ALAN PARSONS SYMPHONIC PROJECT combines the talents of his amazing band with the lush sound of a 70-piece symphony orchestra, creating a very special show with unmatched quality. Together, they revitalize hits such as "Eye In The Sky", "Don't Answer Me" and "Sirius". The lineup consists of Alan Parsons on acoustic guitar, keys, and vocals, P. J. Olsson (lead vocals), Alastair Greene (guitar, vocals), Guy Erez (bass, vocals), Danny Thompson (drums, vocals), Tom Brooks (keyboards, vocals) und Todd Cooper (saxophone, guitar, percussion, vocals). Alejandro Posada conducts the Medellin Philharmonic Orchestra