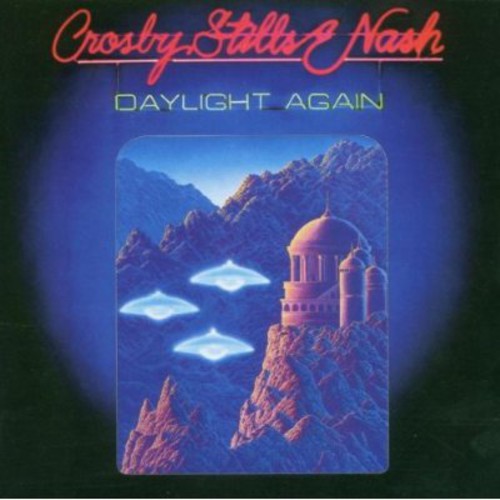 In 1982 the band reunited after more than a decade and released DAYLIGHT AGAIN. Now it has been remastered and expanded with bonus rarities. Features in-depth liner notes and track commentary from celebrated music writer David Wild.

''Daylight Again'' is a 1982 rock album by the band Crosby, Stills & Nash, their fourth of completely original material, and seventh in total. It peaked at #8 on the ''Billboard'' Top Pop Albums chart, the final time the band has made the top ten to date. Three singles were released from the album, all making the Billboard Hot 100: "Wasted on the Way" peaked at #9, "Southern Cross" at #18, and "Too Much Love to Hide" at #69.

The genesis of the album lies in recordings made by Stephen Stills and Graham Nash at intervals in 1980 and 1981, the album slated to be a Stills-Nash project. They employed Art Garfunkel, Timothy B. Schmit, and others to sing in place of where David Crosby might have been. Executives at Atlantic Records, however, had little interest in anything but CSN product from any member of the group, and held out for the presence of Crosby, forcing Nash and Stills to start paying for the sessions out-of-pocket. They began to turn toward the company's point of view, however, and decided to invite Crosby to participate at the eleventh hour. He brought two of his own tracks to the album, "Delta," where Stephen and Graham squeezed their vocals into David's already-taped multi-tracked harmonies, and "Might As Well Have A Good Time," which received the bona fide CSN treatment. Most of the recording, however, features other voices in addition to the main trio, a first for any CSNY record, as is the number of outside writers. The song "Daylight Again" evolved out of Stills' guitar-picking to accompany on-stage stories regarding the south in the Civil War, seguing into "Find the Cost of Freedom," which had been the b-side of the "Ohio" single in 1970.

As the first album by the band in the video age, such were filmed to accompany the two lead singles, "Southern Cross," featuring the band and shots of one of their favorite metaphors, a sailing vessel, receiving a fair amount of rotation on MTV in 1982 and 1983.