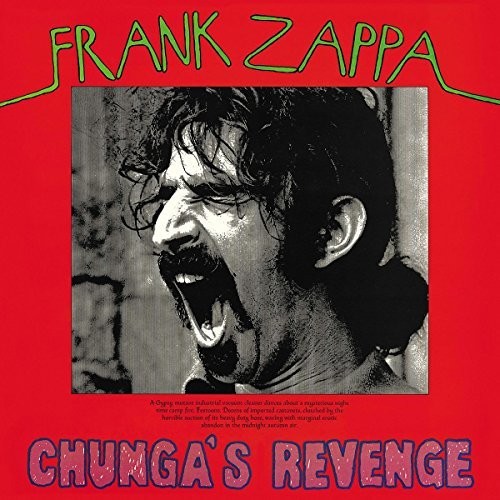 Vinyl LP pressing. Chunga's Revenge is the third solo album by Frank Zappa, originally released in 1970. Zappa's first effort of the 1970s marks the first appearance of former Turtles members Flo & Eddie on a Zappa record, and signals the dawn of a controversial epoch in Zappa's history. Chunga's Revenge represents a shift from both the satirical political commentary of his 1960s work with The Mothers of Invention, and the jazz fusion of Hot Rats. The material presented on Chunga's Revenge is eclectic: side one includes a guitar jam ("Transylvania Boogie"), a bluesy amble ("Road Ladies"), a jazz interlude ("Twenty Small Cigars") and an avant garde live improvisation ("The Nancy and Mary Music") drawn from "King Kong" and other songs from a July 1970 Mothers performance. Several poppy numbers ("Tell Me You Love Me", "Would You Go All the Way?", "Rudy Wants to Buy Yez a Drink", "Sharleena") appear on the second side along with the improvisational title track.