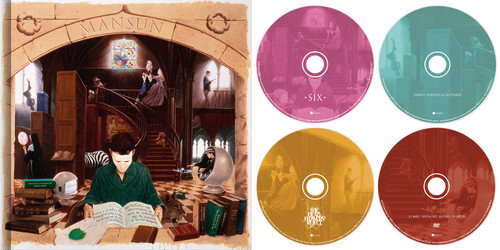 Deluxe four disc (three CDs + NTSC/Region 0 DVD). The three CDs feature the remastered album in full, a disc of demos, rarities and outtakes, and the B-side album The Dead Flowers Reject. The fourth disc is a DVD, which is the album's first ever 5. 1 surround sound mix (DTS 96/24 5. 1 and Dolby Digital AC3 5. 1) by long-time collaborator P-Dub, a hi-resolution stereo audio (24bit/48kHz Linear PCM) and the original promotional videos. The 48-page hardback book features sleeve notes by journalist and long-time fan Paul Lester, and insights from Paul Draper including a foreword, an analysis of the cover art, track-by-track descriptions for both CDs Two and Three and an album overview of The Dead Flowers Reject, amongst plenty of newly unearthed treasures. Digitally remastered and expanded 21st Anniversary edition. Mansun was one of the most iconic and innovative British bands of the late '90s. Tearing up the expectation laid by their smash hit #1 debut album Attack of the Grey Lantern, Mansun followed up in 1998 with their leftfield cult classic Six. The music is a unification of numerous ideas and inspirations, with elements of pop, electronica and progressive rock. They included a Tchaikovsky sample interlaced with electronic drums and spooky synth lines, references to religious skepticism, Winnie the Pooh, Stanley Kubrick, Marxism and spoken word from the legendary fourth Doctor Who - Tom Baker. It's varied sounds result in dynamic switches mid-track to seemingly new songs, making the album a timeless record and it's not short on strong individual tracks with the singles "Legacy", "Being A Girl", "Negative" and "Six". The audio has been fully remastered from the original master tapes by Jon Astley (Van Morrison, The Who, George Harrison, Norah Jones, Rolling Stones).