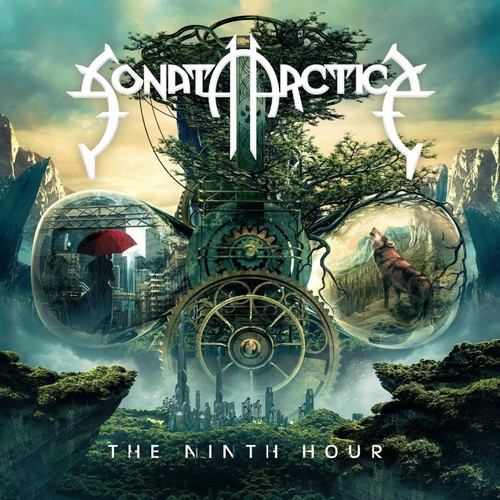 Only two years after the release of Pariah's Child and a massive world tour, the Finnish melodic metal quintet Sonata Arctica are already back for more with their ninth masterpiece entitled "The Ninth Hour. Once again, the album was produced by Sonata Arctica themselves and mixed by Pasi Kauppinen, to create a typical yet refreshing sound that defines the spirit of the band in the year 2016. "The artwork of our ninth studio album The Ninth Hour depicts a future Utopian landscape on the background. Nature and human technologies are in balance. In the middle, we have an hour glass contraption with a knob for us to meddle with. The right-hand side cup represents the nature side with no humans left, on the left we have the human dystopia after we have destroyed Nature. The idea I had was, that turning the knob will tilt the hour glass in one direction or another, and the other cup will slowly empty and that future will be erased. Biblically we are expected to repent and sacrifice on The Ninth Hour... to dive right back to a more mundane reality, it's a fact that we are currently living in critical, historical times. Our decisions will define the future. Not only ours as a race, but the future of this entire planet. We need to make sacrifices and in many cases we will repent our already made choices."
back to top