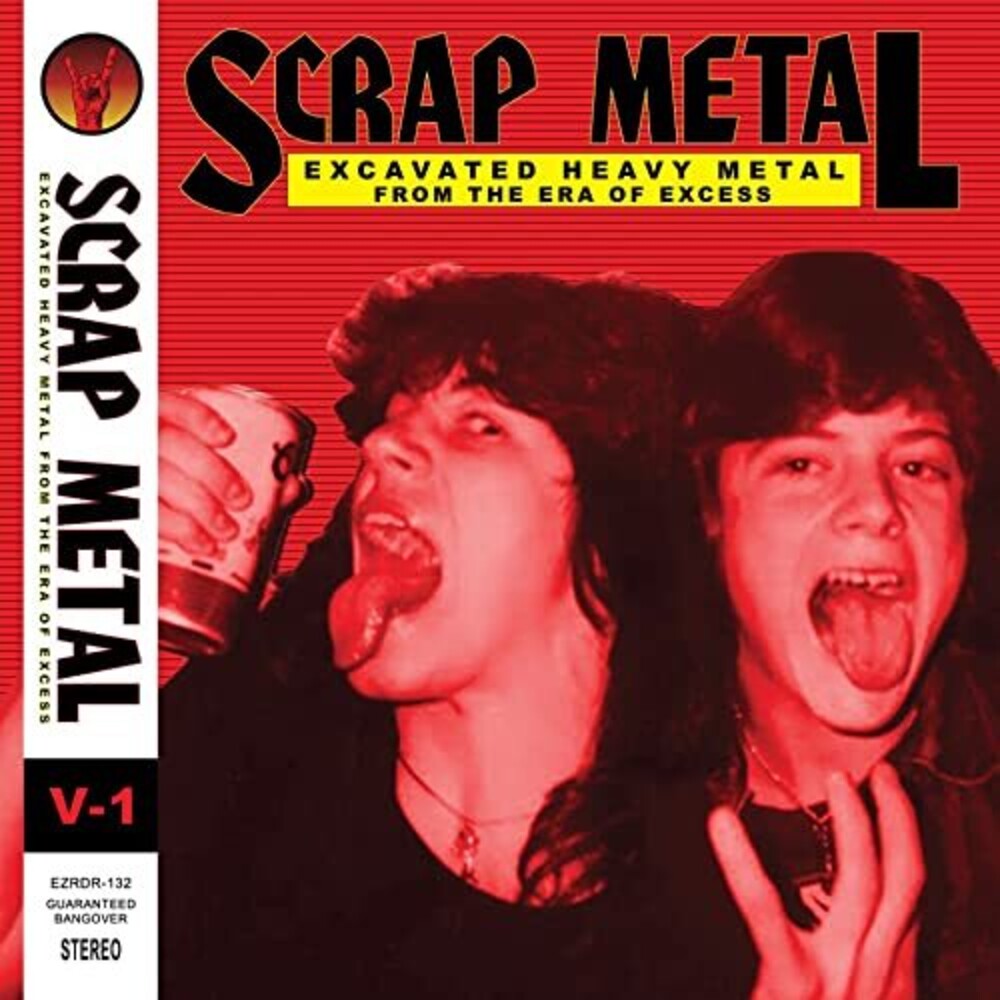 By now you're probably familiar with our wildly popularÂ Brown AcidÂ series of rare, lost and unreleased proto-metal and stoner rock singles from the 60s-70s. In the endless pursuit of those glorious gems, we often uncover equally brilliant rarities from the late-70s to late-80s Golden Age of Heavy Metal that also justÂ mustÂ be heard, but they don't fit the series' aesthetic. Â Scrap Metal, Volume 1Â collects some of the greatest unknown and lost Heavy Metal tracks, long buried beneath the avalanche of the era's classic output. We all know the old adage that history is told by the winners. But sometimes the losers tell the best stories. And while none of these bands found fame and fortune, this artifact and the volumes to come are testament to the enduring power of heavy music. You can hear the blood, sweat and beers that went into each of these singles. The recordings may be low budget, but the inspiration and talent is immutable. Not only are the amps turned up to 11, the boyish sexual innuendo is cranked to 69. You can hear the convergence of influences - NWOBHM, thrash, glam metal, doom, etc - colliding at once as the era birthed a wellspring of subgenres. Many of these singles are self-released and were thus limited to a small run of copies. Those that remain are hoarded by collectors and sold for exorbitant amounts. We've collected the best of the best for you here. As withÂ Brown Acid, all of these tracks are licensed legitimately and the artists all get paid. Because it's the right thing to do. LINER NOTES:Rapid TearsÂ launch this series with the perfect christening. The Toronto, ON quintet's 1981 single "Headbang" is such the pinnacle of heavy metal madness that it almost sounds like a spoof. There's also enough of the rapid-fire sputum that inspired Metallica to bang the head that doesn't, as such, engage in said practice, to be found on the band's sole full lengthÂ Honestly. But "Headbang" is a straightforward glammy anthem for the ages. Air Raid's "69 In A 55" may be lyrically so sophomoric that it's actually pretty clever, but this 1983 Bay Area power metal single is loaded with sleek Judas Priest riffs and interwoven melodies that are downright sublime. The band's sole release, the 2-songÂ Rock ForceÂ 7" features a curious band photo in which 3 band members - dolled up in CrĂĽe makeup and leather - are sexually menacing the lead singer/guitarist tied to a bed. Another low budget highlight is when singer/guitarist Tommy "Thrasher" Merry imitates a delay effect on his vocals as he sings, "tonight!... tonight... night. "Hades' "Girls Will Be Girls" has a real demo cassette feel to it's vastly uneven mix, but the energy to the performance makes this an undeniable keeper. The long running Paramus, NJ quintet's 1982 2- song debut 7" titledÂ Deliver Us From EvilÂ features this blistering thrasher dominated by shimmering leads and confident vocals that show why the band went on to near-fame on Metal Blade Records. ReslessÂ don't need no T to prove that they've got "The Power" with this 1984 driving mid-tempo rocker in the vein of MĂ¶tley CrĂĽe and Ratt. The River Vale, NJ quartet's tight crunch wails all over Bon Jovi posers but it's the band's unique and subtle deployment of background vocals that gives this rager it's staying power. Pittsburgh, the Steel City, is home toÂ Don Cappa, a band that pays tribute to the burgh, the metal, and the awesomeness of both with "Steel City Metal. " Their lone single, issued in 1987 with only 300 copies released, sounds like the work of some serious steel driving men, with a drummer who might've forgotten to wear a hard hat one too many times on the construction site. The BeastÂ has more of a punk feel to their aggressive "Enemy Ace" track from the 4-songÂ Power MetalÂ EP from 1983 - something like Dr. Know meets D. O. A. But their look, artwork and lyrics all prove that Heavy Metal is where their hearts lie. And this hook filled monster delivers repeated lines like, "I command them all in my lofty realm," with commendable conviction. Dead SilenceÂ from Denver, Colorado, debuting in 1984 is not to be confused with Dead Silence from Denver, Colorado, who also debuted in 1984. The former a workman's hard rock bar band, the latter a political peace punk band and neither knowing of the other's existence throughout their tenure. The pre-internet days were a marvel, indeed. ThisÂ Dead Silence spits out a slick, Nugent tinged rocker called "Can't Stop" about life on the road. The Danger Zone is, by all accounts, not the place to be. And,Â Hazardous WasteÂ of Boston, MA saw fit to add their two cents on the matter with this 1986 single that combines Van Halen's flashy musicianship with NWOBHM aggression that sounds so awesome it teeters on itself entering the "Danger Zone. "Czar's heavy, doomy "Iron Curtain" single from 1982 hearkens to the sleazy sounds of Saint Vitus and Pentagram with it's cranked up DOD Distortion pedal in a Peavey combo amp guitar tone and meaty, barking vocals. The upstate NY quintet only issued this 2-song single, but it's driving rhythm, nosedive whammy-bar guitar solos and comparatively mature Cold War subject matter show they had real potential. Not much is known aboutÂ Real Steel's majestic "Viking Queen" from 1987, other than it rocks hard and the 7" 45 sells for upwards of a grand on the collectors market. The Flint, Michigan band recorded at the home studio of local radio personality Bill Lamb, who primarily released Christian Gospel recordings. So, perhaps the band was struck down by a bolt of lightning shortly after this rare single's release. Whatever the case may be, it's a must have for fans of classic metal mayhem.
back to top