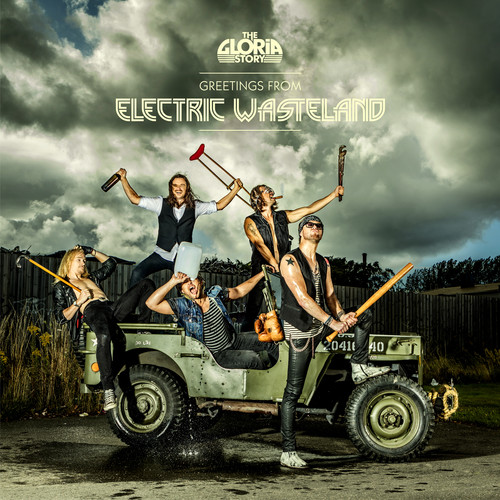 2015 release, the third album from Swedish old school rockers The Gloria Story. After nearly a year of writing, evaluating demos and finally entering Kingside studios, Stockholm - it is here! Greetings From Electric Wasteland is an album with a mission; to put fun back into hard rock. In dark times as these The Gloria Story figures the last thing this world needs is another depressive metal effort. Greetings From Electric Wasteland serves as a counterweight. It's an escape from reality. A soundtrack to your next party. The analog sound echoes from past masters like early Whitesnake or Kiss, and some songs on the album could easily have been forgotten gems from a 1978 mixtape. It's sexy, upbeat and groovy with high pitched vocals and innovative, dirty riffs that will shake your core and cut through the night like a knife. Still there's plenty of heavy songs to keep the hard rockers satisfied. The Gloria Story are huge fanboys of `70s rock, and never hide their own taste in music. But nonetheless every song on GFEW sounds competitive and fresh, oozing with renewed energy. This is reinvented and regrooved classic rock, without ever sounding stolen or outdated. This album is proof that real rock and roll can still make you party in a way no house DJ ever could! So buckle up and head out into the electric wasteland with The Gloria Story in the driver seat!
back to top