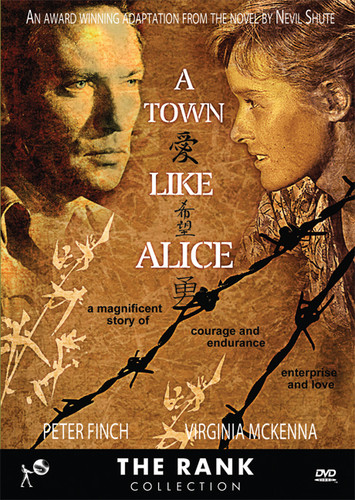 A classic war movie like no other, because it is told from a woman's perspective. The film is based on the moving novel by Nevil Shute. It is set during WWII in British Malaya, 1941. The Japanese army has been advancing rapidly through the British territory. The men they captured are sent off to labor camps, but they don't have a plan to deal with the many women and children that are left behind. Not sure what to do with them, the Japanese force their captives to march for miles and months on end all over Malaya in search of a camp willing to take them in. Virginia McKenna plays one of the courageous women prisoners, who through her fighting spirit and will to survive, keeps the others going on their arduous journey. Along the way, they cross paths with Peter Finch, an Australian POW, who risks his own life to help the sick, starving and abused women and children survive. Finch and McKenna inevitably are drawn to each other and together form a lasting bond. FYI, the town like Alice refers to the town where Finch's character hails from: Alice Springs in the northern territory of Australia.