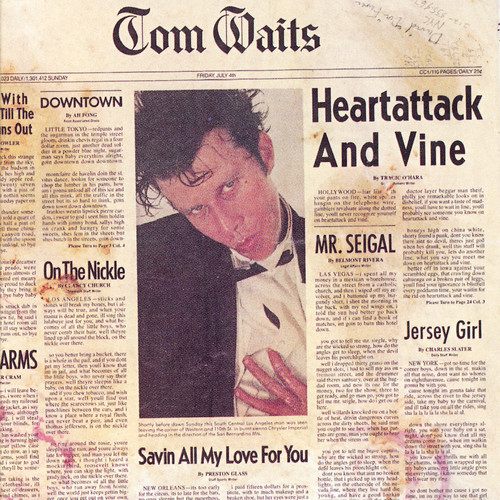 Digitally remastered edition. Released in 1980, Heartattack and Vine was Waits' final album on Elektra Asylum and it built on the raw blues approach of Blue Valentine with the incendiary title track, the funky, organ driven "Downtown" and the stomping NOLA blues of "Mr. Siegal". This album also contains some of Waits most popular ballads, including "Jersey Girl" which was famously a hit for Bruce Springsteen. "On the Nickle" is a moving song about the homeless people who lived on 5th street in downtown LA, and "Ruby's Arms" is a beautiful song with a lovely Bach-like melody. Tom Waits is a critically acclaimed singer-songwriter, musician, composer and actor. His deep distinctive gravelly voice was described by critic Daniel Durchholz as sounding as though "it was soaked in a vat of bourbon, left hanging in the smokehouse for a few months, and then taken outside and run over with a car". Waits has built up a distinctive musical persona with his trademark growl, his incorporation of pre-rock music styles such as blues, jazz, and vaudeville, and experimental tendencies verging on industrial music.